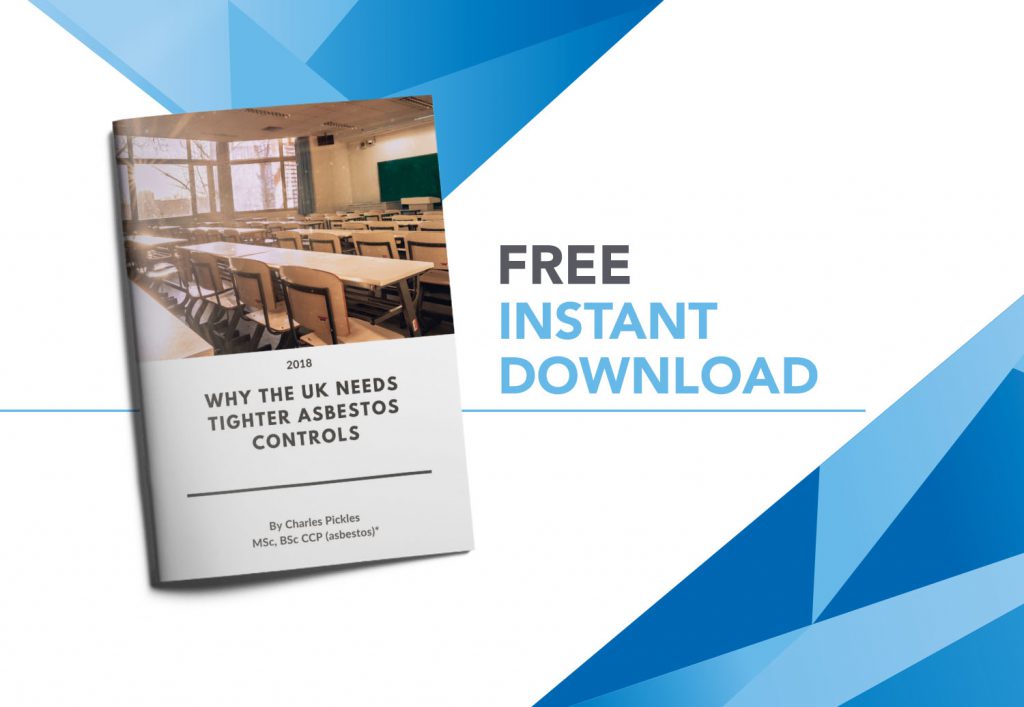 Shocking statistics reveal that the UK’s asbestos safety regulations and preventative measures fall short compared to other European countries that have less of an asbestos problem.

In the latest white paper from Charles Pickles MSc, BSc CCP (asbestos), Why The UK Needs Tighter Asbestos Controls, statistics demonstrate that the UK’s current asbestos regulations enforced by the HSE are decades behind that of other European countries.

The level of asbestos contamination (HSE clearance indicator) used to declare buildings suitable for normal occupation, is known by the Health and Safety Executive, not to be safe. The paper calls for the Health and Safety Executive to change the level, to a safe level. This clearance indicator has remained the same for the past 30 years despite ample evidence demonstrating that this level of exposure remains unsafe. Whereas our European counterparts and closest neighbours have introduced far stricter controls in recent years, the UK has not. The Netherlands updated its occupational exposure limits to 0.002 f/ml in 2014 with the intention of lowering it even further to 0.0003 f/ml in the future.

The classification of acceptable exposure levels to asbestos fibres in the UK is far higher than many other European countries.

Why Does The UK Need Tighter Controls Of Asbestos Exposure?

According to the report, Why The UK Needs Tighter Asbestos Controls, during the periods of 1920 – 1970 and 1971-2000, Europe used 48% and 58% of the entire worlds tradings of asbestos, arguably making Europe the historical global centre of asbestos use; the UK, Germany and France being the highest importers (as shown in the table below).

Unfortunately, this also means that the highest amount of asbestos-related diseases and subsequent deaths are also associated with European countries currently.

The figures shown in the White Paper that there is a direct correlation between the amount of asbestos used per capita and the number of deaths from mesothelioma (a type of lung cancer directly associated with exposure of asbestos). As the largest importer and user of asbestos, the UK features the highest amount of mesothelioma deaths. It is important to note that these statistics do not make reference to other asbestos-related diseases and so the figures do not account for the larger issue of asbestos exposure in the UK and other countries.

The Need To Know The Risks

So what does this mean for the UK and its workers? As described in the white paper, much of the amosite and crocidolite asbestos in the UK was installed into buildings during the post-war period. The asbestos was used in larger public buildings where the need for fire protection was greater such as in schools, hospitals and government buildings.

The asbestos, when first installed, was less of an issue and threat to workers within these buildings. This is because asbestos that is in good condition and well managed is a low-level risk. However, many UK schools, hospitals and public buildings such as pubs, are slowly degrading. This means the asbestos within these buildings are also degrading and are now posing deadly risks to the building occupants. Every time a door is slammed in a hospital, a group of school children run through a hall or a group of office workers walk down a set of stairs, there is a risk of asbestos being disturbed and deadly fibres being released into the air. Inevitably these fibres will be breathed in and can become a life-threatening disease.

If the UK implemented tighter asbestos controls and matched the regulations of that of other European countries, these potential risks could be better managed and would aid in preventing future deaths.

Charles Pickles’ white paper, concludes specifying the need for the “Duty To Manage” asbestos regulation (HSE, 2012, Control of Asbestos Regulations, Regulation 4) ought to be amended to effectively measure fibre concentrations during normal occupational areas where high-risk asbestos is known to be present.

How Can We Improve Our Current Regulations?

Contrasting to many other European countries, the current microscopic technology used to monitor asbestos fibres in the air falls short in the ability to measure at the same microscopic levels used by other nations, rendering it useless for assessing low-level chronic exposure areas. The current microscopic monitoring most commonly used by the UK is PCM. A technique developed in the early 1960s. This method is effective for monitoring high-level exposure environments but for low-level exposures such as those occurring in public buildings where the asbestos degrades over a long period of time, it is incapable of providing the depth of analysis required.

In order to conduct effective reassurance air testing and monitoring that goes far beyond the current HSE’s regulations of 0.01 f/ml and matches those of other European countries who are actively combatting their asbestos-related diseases, it is imperative to use TEM or SEM to effectively assess the asbestos fibre concentration in the air.

Should We Remove All Asbestos From All Buildings?

Unfortunately, the reality is that we can not remove all asbestos from buildings, so we need to use the best techniques to manage it in-situ, whilst targeting our resources to remove the most dangerous asbestos first. Through effective air testing and monitoring the UK can manage their asbestos in situ (leaving the asbestos where it is but managing and protecting the asbestos-containing materials, preventing exposure). Managing asbestos in situ using effective TEM/SEM reassurance testing is a more cost-effective and realistic solution to the amount of asbestos present in public buildings.

Many organisations call for the complete removal of asbestos from all buildings nationwide. To put this in perspective, over 70% of schools within the UK are said to have asbestos-containing materials within them. To remove these potentially lethal materials completely could result in many schools being shut down due to the soaring associated costs with the complete removal. The cost to councils and the taxpayer arguably would be crippling and unmanageable.

“Rather than resorting to full removal of asbestos, modern air monitoring and analytical techniques provide the means to accurately measure any risks to occupants that might be present and enable the appropriate remedial actions to be taken. In the short and medium term, following the example set by countries such as France, Germany and the Netherlands, the focus should therefore be on the improved management of asbestos in schools and other buildings.”

In summary, the current regulations imposed by the HSE fall short in protecting school children, students, workers and the general public. The regulations are overdue an update and must come in line with regulations currently in place in other nations. As Charles Pickles suggests, ‘what is not measured is seldom well managed’.

With widespread concern over the potentially harmful effects of asbestos in schools, modern air sampling and analytical techniques have the ability to better protect the health and safety of teachers and pupils. There is no safe limit of asbestos for people to breathe and we want everyone with a responsibility for safety in our schools to better understand the situation.

The white paper has been designed to provide important information to those who manage asbestos in buildings, in particular those who are responsible for the maintenance of the property and teachers.

As part of Lucion’s Take Care Be Aware initiative, we actively take care of our health and safety responsibilities, with continuous awareness of our commitments to knowledge share and educate.

In doing so we have created a ‘toolbox talk’ on asbestos awareness to raise awareness of the hazards associated with asbestos-containing materials, enabling safety professionals to share knowledge and overall save the time and effort in producing them for you and your teams.